Among the most asked (and argued) questions on tri forums (ie, Slowtwitch) regards the best strategy for riding a hilly triathlon course. Most answers are of the sort where people just post their own anecdotal experience, and then they finish with stating how great their approach has worked. Guys with lots of road racing experience will usually advise hammering up the hills, and then tucking and coast down. Others will advise a steady effort.

None of this is meaningful without a methodical approach that takes the right issues into account. We start with a few basic premises:

First: We are to adopt here (as I've made clear throughout this blog) the notion that increasing physical effort (power output) has an even more-rapidly increasing effect on physical stress. It has been shown that, as power output increases, various markers of metabolic stress increase to the fourth power of increases in power output. In other words, 5% more power -- or 1.05 times what you were doing before -- increases your metabolic stress by 22%, which is (1.05^4) - 1.

This relationship is at the core of the "normalized power" construct that has proved to be enormously useful and reliable for planning racing and training. By "normalizing" we mean that, rather than use the simple average power output for a given ride, we weight the averaging by this fourth power calculation. In a simple average, 100w for 10 minutes, then 200w for 10 minutes produces an average of 150w for 20 minutes.

When normalizing the power output for the exponentially higher physical cost of the higher effort, the average NP = 171w. This is higher than the 150w simple average, and reflects the much higher cost of the harder second half of the ride. The stress of the ride was *as if* we had ridden the whole thing at 171w.

When we ride a triathlon bike course, we need to decide ahead of time what power output we could hold *if* the course was flat and we could ride at a dead-steady effort. Let's say I decide to ride a course at a goal of 175w. *If* the course was flat, I would just sit on that power output the whole way. But, my course is hilly and I need to know if I should ride harder uphill, and by how much.

I set up a program to ask this question. It's a straightforward objective/constraint analysis, with fixed inputs.

To look at the question, we can ignore the flat parts of the ride (simple answer: sit on 175w), and analyze just a few stylized hill sections. We'll look at three: Steep, short up and longer shallow down. Long shallow up and shorter steeper down. Equal going up and down. 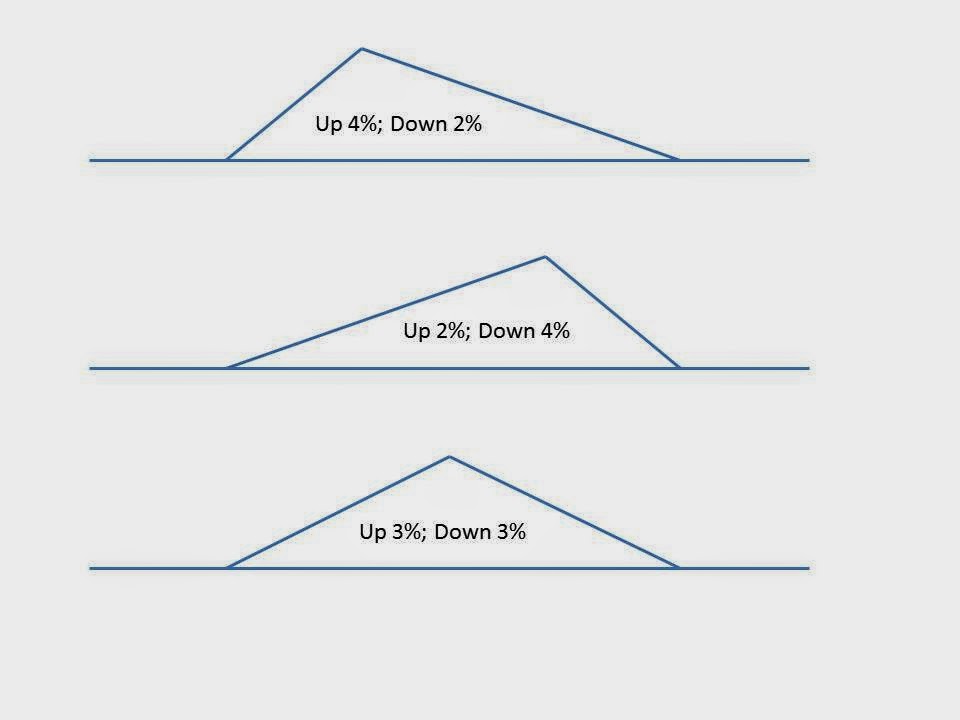 2% up; 4% down half as far
183w going up; 109w coming down.
The longer ride up requires keeping the power bump lower (just +5%!); the steeper descent means soft pedal even less.

The gist of all this is that there is no single best strategy. But, some rules of thumb are apparent:

In all cases, do not spike your power much more than about 10%, and that's only if it's a short climb relative to the descent. It's not worth the little extra speed -- you'll just tire out faster, ride slower and, of course, run slower.

The longer the hill, the more you need to back off the temptation to ride harder.

I won't go into the details for a strategy with wind. Suffice to say...the optimal strategy for dealing with headwinds and tailwinds is very close to just riding steady and ignoring the wind. So close in fact that you should just ignore wind and ride at your target power as if there was no wind.
Posted by Rick Ashburn at 9:19 AM